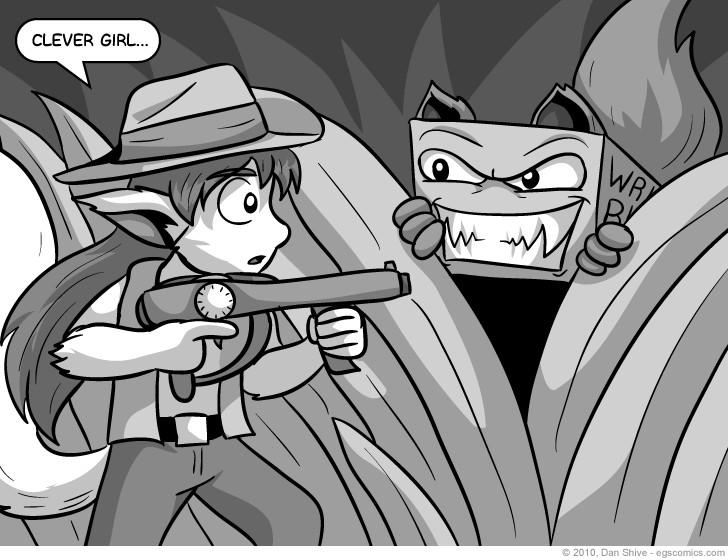 Posted December 16, 2010 at 1:00 am
This isn't the first time I've been hunting Writer's Blocks... Although, in sketchbook "continuity", there's only one, so I'm not sure how it flanked me here, and it's technically my pet...

I wanted to see when Writer's Block last appearance was, and I might be wrong about this, but I think it was 2008. Damn. No wonder the little guy's gone feral!

This sketchbook was inspired by two things. First, the fact that I had a bunch of scripts done, but then decided they didn't really work and set them on fire. Secondly, Jurassic Bloody Park. I love those movies. I'm hoping they make a fourth one. I don't care if the story's crap; I just want to see realistically rendered dinosaurs in a movie. If you put a T-Rex in a trailer, I WILL see the movie.

Yes, even that one. Seriously, they should do a cut of the Land of the Lost that's just a montage of the T-Rex scenes. They could call it Land of the Lost: Good Version.

Speaking of Jurassic Park, and Robert Muldoon in particular, the first movie inspired some truly horrendous comic books. Well, maybe not horrendous. It's been too long since I've read them to make that call, but the comics I refer to took place after the movie and had criminals trying to train velociraptors.

Wait, that sounds awesome. I need to track those things down.