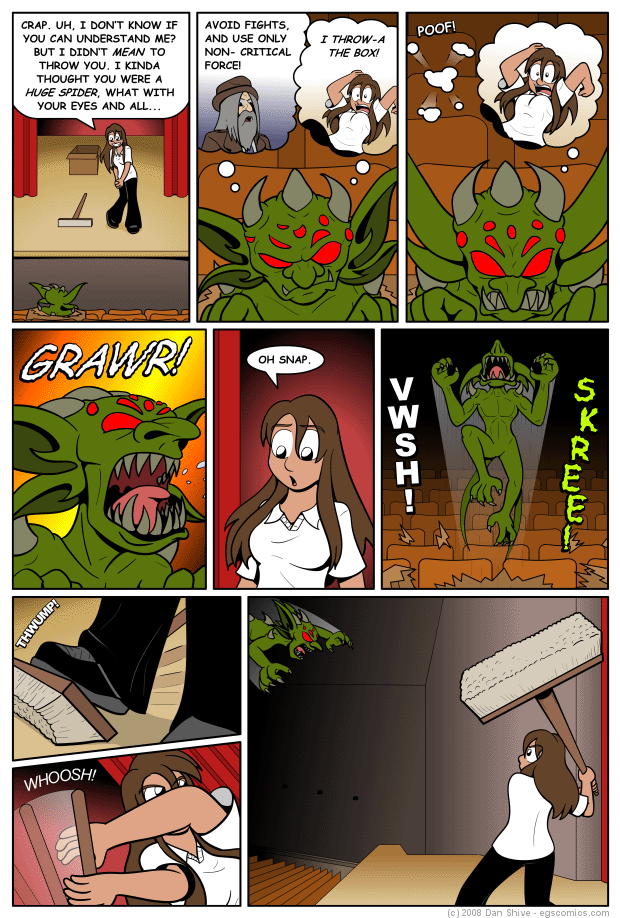 Posted July 28, 2008 at 1:00 am
I'm not sure why I find the inclusion of an extra "-a" tacked onto verbs in such sentences, but I do. It probably has to do with Italian stereotypes, such as the over-the-top Italian chef on [[wp:The Simpsons]], or Mario from the [[wp:Super Mario Bros]] (or sisters after a well aimed TF Gun blast), so I should be probably ashamed of myself.

I like that Elliot's pose is fairly feminine in the first panel. I enjoy it when transformed characters unintentionally do things they wouldn't normally do without even really being aware of it, such as that cute pose. I am well aware that plenty of women would not assume that pose, but part of the fun of having gender transformations in a comedy is playing with such changes in behavior and how they fit with our expectations of gender behavior. I also like the idea of female Elliot somehow being more girly than Ellen.

So really, whether Elliot does something that many would consider manly while transgendered, or something girly, I am amused. ...HOORAY!

As should be much more apparent now than in previous comics, the Bloodgrem's physiology is based on a monkey's. I actually referred to images of monkey skeletons while drawing it, which proved very useful. If not for those, the fore arms wouldn't be proportioned properly.

One might notice the Bloodgrem is being drawn with less skin and horn details as of this comic. This is primarily due to the old design feeling out of place once it started having scenes with Elliot. They didn't really look like they belonged in the same comic, so I decided not to have those on the Bloodgrem anymore for anything but intentionally over-dramatic closeups. This was somewhat of a painful decision, as I'd already drawn some of those details.

I'm certain there are at least some imperfections in Elliot's poses while grabbing the broom, but I'm still proud of those panels. I put a LOT of extra time into trying to get those poses right, and testing with my own arms to see how one would have to reach back to grab the bottom of the broom and then swing it around to a batter stance. The batter stance was also difficult, as almost every reference I found on Google showed the batter's chest, and I needed references from the back. I was hoping to get female references, but the only good ones I could find were male. Most of the female images I found linked to baseball involved scantily clad women, which were welcome discoveries, but not useful for the task at hand.