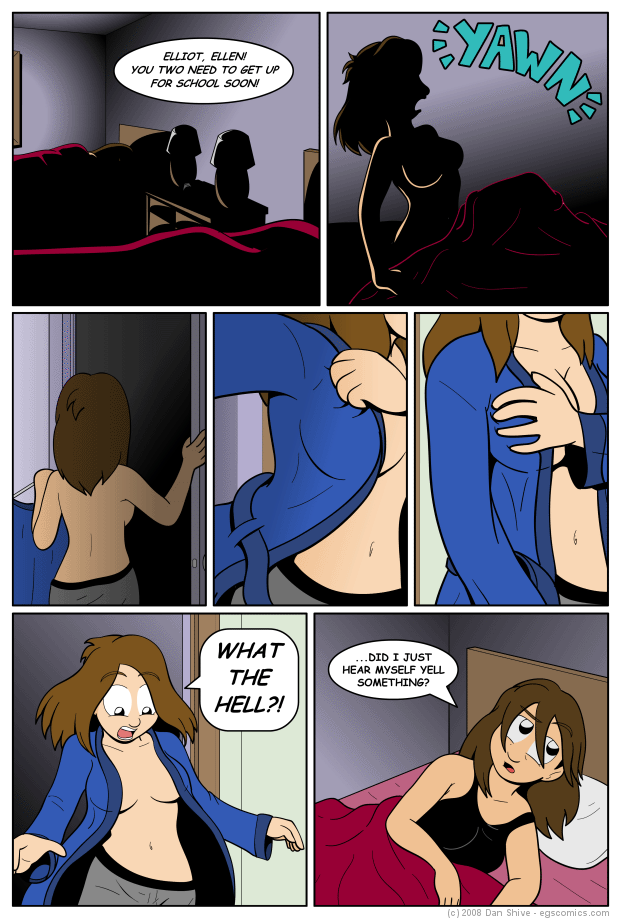 Secondly, if it's not clear that it's Elliot in panels two-six, it will be in the next comic. Of course, if you just read that last sentence, you're done pondering that issue, aren't you? Feel free to enjoy your lack of pondering by putting your extra time towards frivolous fun.

Thirdly, I'VE BEEN WAITING TO HAVE THIS MOMENT SINCE THE FIRST SISTER STORY ARC! It's about TIME this happened! YEESH! RAGE! EXCLAMATION! Though, I must admit, it's a good thing I waited. I didn't have an explanation for this back then; I just wanted it to happen. Now I actually have a reason for this to happen, and one can safely assume that I will at some point explain just what the heck is going on and why.

For now, however, topless female Elliot in drooping boxers, and frankly, is anything else necessary?

...Well, nuts to you, naysayers. Just can't please some people.

EDIT: As those who saw the original version of this comic are well aware, an edit took place. In the original upload, the second panel was completely uncensored. Boy, was THAT embarrassing!

Ok, no, that's a lie. The REAL edit is that I made the hallway colored differently from Elliot and Ellen's room. In the original version, it looked like Elliot had stayed in the room, but was inexplicably better lit for some reason. I hope this should make it clear that Elliot has left the room and did not simply put on the robe.