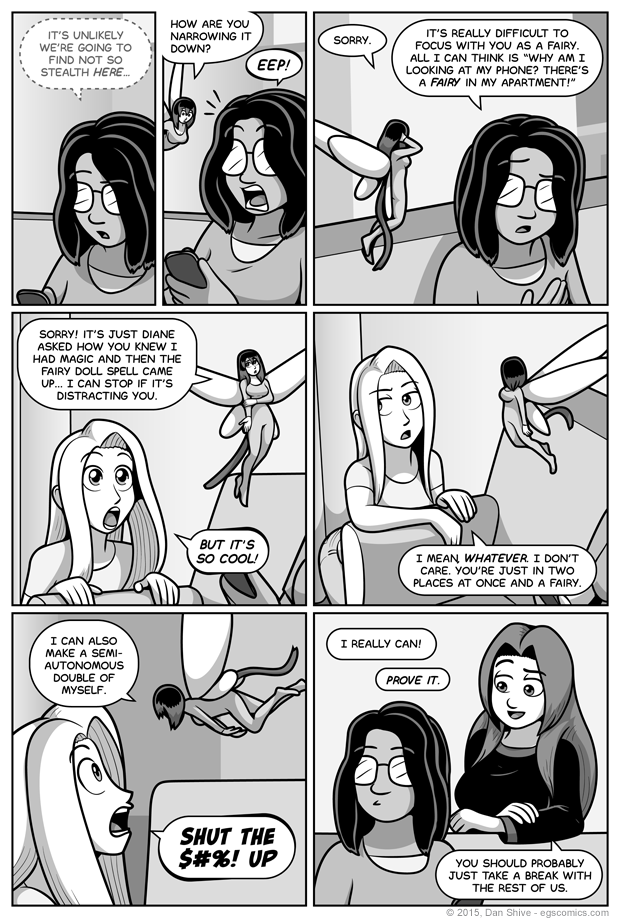 *Erhem* Anyway, hi! The story comics are back after a week off to do something about being behind schedule on sketchbooks and classic commentaries. During that week, I determined that the #1 reason I run into issues is the lack of an update buffer. Having to set prioritize what's going up the next day really messes things up for a number of reasons I could go on about, but long story short is this:

By the end of the day this was posted, every scheduled comic for this week will be complete, EGS:NP and Story. Every section on this site is going to have a buffer.

And by every section, I mean every section. Starting this Thursday, one or more (usually more for a while) sketchbooks will be posted on Tuesdays and Thursdays.

Classic commentaries will be posted whenever I write them, and will be announced whenever a classic storyline has been completed.

Commentary for, you know, THIS comic

I wanted to shake things up for this bit of checking in with Ellen's crew, and nothing does that quite like random use of the fairy doll spell with a little FV5 (Female Variant #5) thrown in for good measure.

Speaking of FV5, I've been reevaluating exactly what its transformation effects are, and how extreme they are. I took it to a bit of an extreme for the sake of contrast back when Ellen sneeze-zapped herself, and that's been the status quo for a while. In some sketchbooks since then, the effects have gotten a bit absurd, and not terribly consistent with how FV5 is supposed to function.

I may elaborate further later, but for now, I'm just going to say some adjustments have been made. This has absolutely nothing to do with how awkward I feel trying to write about this sort of thing, I assure you.