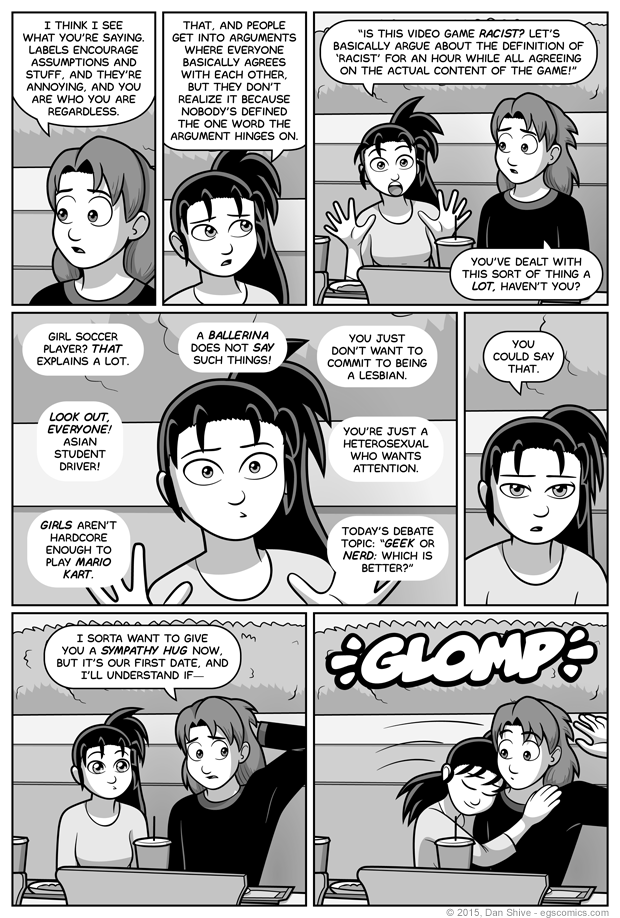 Panel four was difficult to write. Not because it was difficult to think of things. Everything there is based on things people have actually said (except for maybe saying Mario Kart is hardcore). It was because knowing such things have been said is wince-worthy.

Anyway, hang on a second. I just need this dealie. *Drags out an enormous soap box and stands on it* THERE we go.

One way in which people accomplish this is by claiming such and such is "just _____". Instead of considering why a person might feel the way they do, one puts something they can dismiss in that blank, and they're free to not have to employ empathy or complex thought.

And, of course, there will be times when that blank could actually be accurate. Someone could be trying to get a rise out of someone, or want to feel superior in some way, or are trying to start a fight, etc. Sometimes, the blank could fit. It would be disingenuous to claim otherwise.

That said, and I wish to emphasize this as best I can, sometimes, possibly even most times?

There are very real reasons why people feel the way they do.

That doesn't  guarantee their logic is solid. It doesn't mean one will definitely see things their way after making the effort to really get where they're coming from. I'm mostly just saying that maybe people with strong opinions about various social matters have those opinions for reasons that, if nothing else, are very real to them, and might even have been borne out of pain.

Sidenote: It's my understanding that most ballerinas swear like sailors (who swear like lumberjacks), so I'm assuming Ashley's instructor had a distorted view of things.