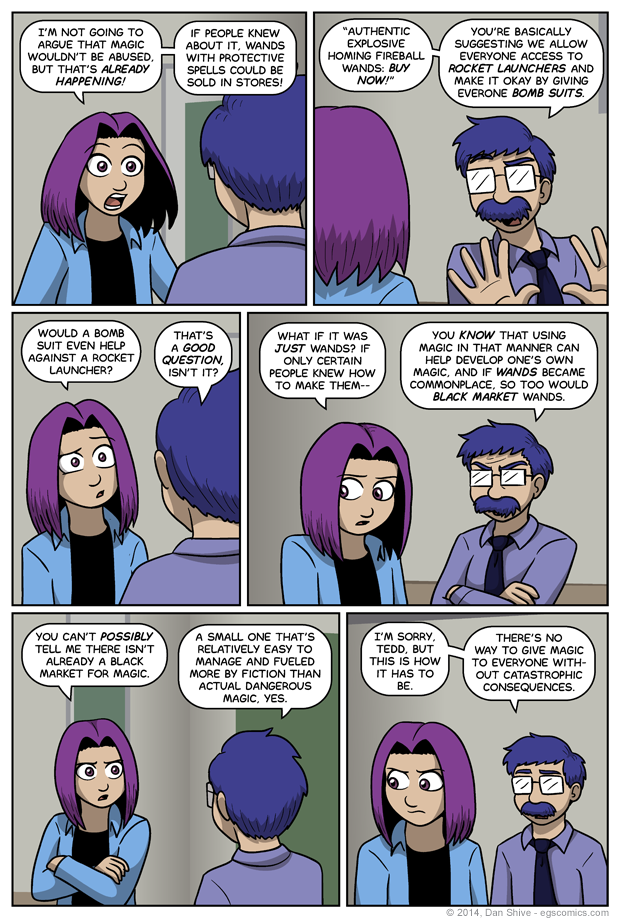 This comic briefly looked exactly like the previous comic due to a mistake made while updating the image files (for REASONS). If this affected you and confused you to no end, I apologize.

The original example line I wrote for Tedd's dad in panel two was "authentic Delayed Blast Fireball wands: buy now!" This was a reference to a particularly powerful spell in Dungeons & Dragons and I liked the implications of Mr. Verres being familar with it. I decided against it, however, as I wanted the severity of his example to be apparent to everyone and the significance of the "delayed" part could just confuse matters for those not familiar with the reference.

I still boldly claim that Mr. Verres would totally know what you were talking about if you mentioned that spell to him, however.

With ever color of the palette needed for this scene already decided upon, this comic only took a little longer than a greyscale one would have by simple virtue of there being more colors to keep track of and having to add the whites of Tedd's eyes. All in all, the decision to go with color is proving to not be TOO terribly mad.

Speaking of color, fun fact about Mr. Verres's blue hair: I chose it by taking Tedd's purple hair and making it "cooler", resulting in that blue hue. Were I to make a "warm" version of Tedd's hair, it would be more orange.