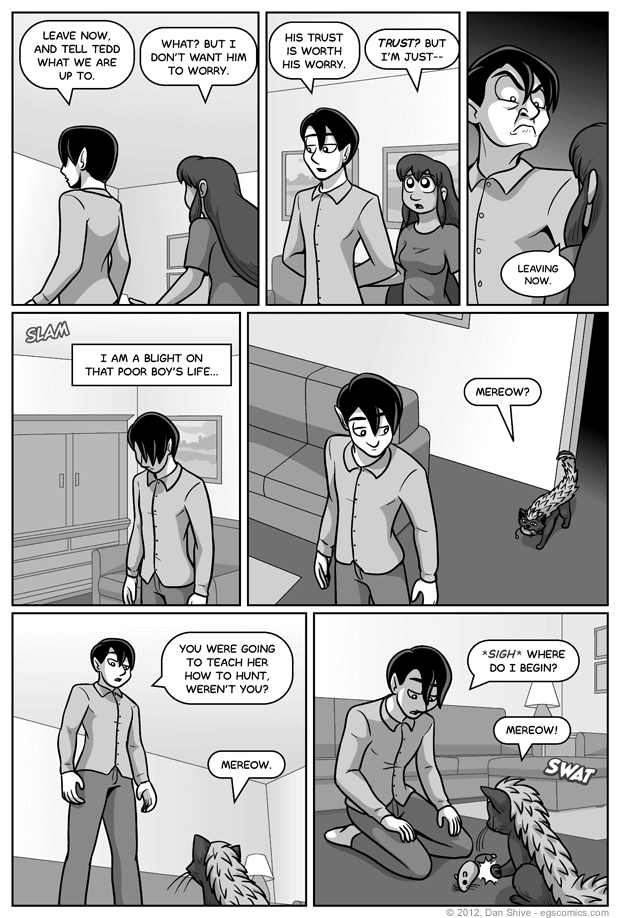 Much about Max and cats

It's been theorized that this is what cats are really doing when they bring you one of their toys or a dead animal. The common perception is that they're giving gifts, but if the theories are true, it's actually the cat trying to teach you to hunt. This would explain a lot of the behavior of one of my old cats, and why she once thought it would be a good idea to bring a live small animal inside and let it loose for others to deal with. I guess I had progressed to stage two of my training?

I originally imagined Max showing up to teach hunting before Grace even mentioned dating Tedd and Grace nonchalantly going along with the lesson ("like this?" *swat*), but there really wasn't a good spot for it. I'm okay with that, however, as Raven's willingness to humor his cat is more meaningful as a character moment than Grace's willingness would have been. Grace going along with it is simply cute and establishes Grace as being, well, Grace, and I think Grace has been firmly established as Grace before now.

I wanted to find a good reference of a cat walking for panel five of this comic, and I was looking for a side view in order to get a clear picture of the actual leg placement. This proved frustrating, as all of the images I initially found fitting that description were of very black cats. This made it almost impossible to tell if any given leg I was looking at was from the right or left side of the cat. I eventually found some suitable references, but I was *this* close to waking a sleeping animal for a real live reference.