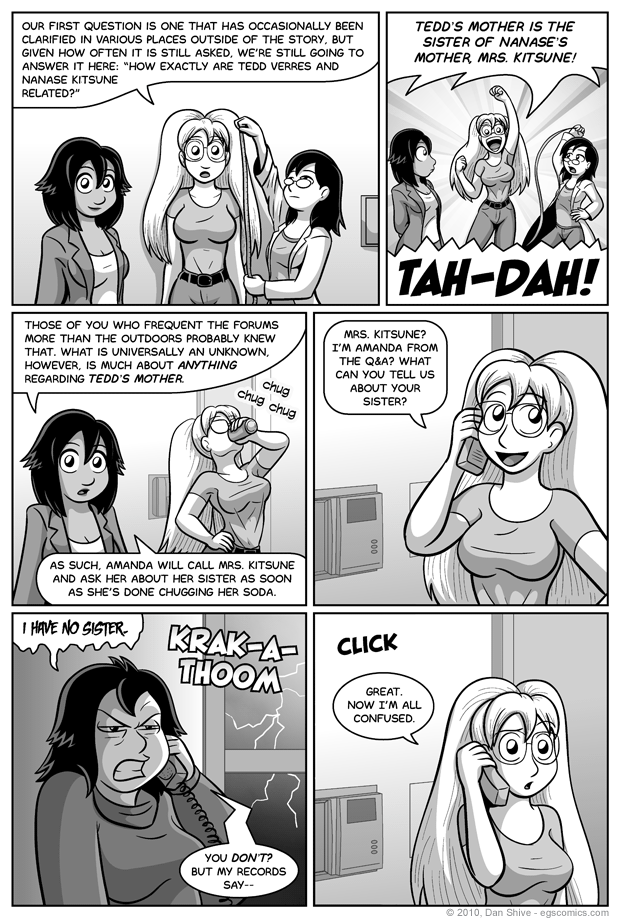 Yes, I know that "I have no _____" followed by the other person taking it too literally joke's been done to death. For me, however, the real joke is how serious Mrs. Kistune is and the return of "krak-a-thoom". The last panel mostly exists to close out the page and show Amanda's shrinking progress (incidentally, she's 96% normal size overall in that last panel).

Speaking of size, Chika is on tippy-toes and stretching to get the tape measure that high in panel one, so she's even shorter than she looks. Lisa looks a little big in the first two panels, but that's perspective at work. Amanda is right by the wall while Lisa is closer to the virtual camera because, really, shy would she be up against the wall too?

The overly dramatic second panel is basically making fun of the fact that I didn't think this would be a big reveal. I'm answering it because a lot of people ask, but I thought I had effectively answered this way back when Mr. Verres referred to Nanase's mother as her sister in law, unless it was later when I revealed Nanase's last name. Anyway, those two facts together suggest either a convoluted explanation (which I am certainly capable of), or the family connection had to be between Tedd's mother and... wait a tick. That still left open the possibility of Nanase's father being the brother of Tedd's mom, didn't it?

...Wow, I guess this really is new information. I don't know why that didn't occur to me, like, ages ago. I seriously just thought of that while typing this. I'm guessing it probably has something to do with Nanase's father not having a single line of dialogue yet. When he finally says something, it's going to have to be dramatic.