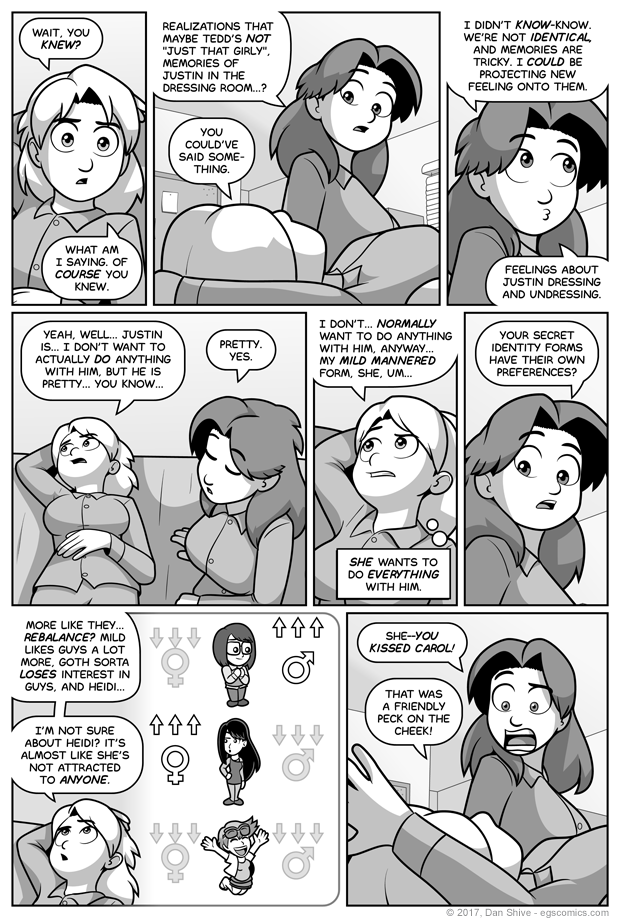 This comic was partially delayed by matters not at all related to the comic itself, but it was ALSO delayed because I wound up rewriting a lot of it, and figuring that out took long enough to only leave me two hours to get everything beyond the script done "on time". In a rare moment of accepting reality, I decided to change up the schedule slghtly.

What follows addresses the more major editing concerns (there was plenty of basic re-wording and such besides).

To include, or not to include

I've been making an effort to edit out things not really important to the plot (believe it or not), and this page was something I could pretty easily cut. Shockingly, the exact preferences of Elliot's secret identity forms aren't super critical to the Sister 3 story arc.

As such, I went back and forth on whether to even include this page. Ultimately, however, I decided this does help elaborate on some things, and it is a natural moment to address how Mild Mannered Elliot was around Justin.

A little too open

In the original version, Elliot said "she wants to do everything with him" out loud. He didn't even hesitate to say it. Even talking to Ellen, that's a bit too open for Elliot.

I originally wrote how the preferences for the secret identity forms worked a bit differently, and nearly made canon things I would not have been happy with later.

For one thing, instead of "rebalancing", Elliot described it as "amplifying". That might seem like a minor difference with similar results either way, but I like the rebalancing concept a lot more for Mild and Goth Elliot.

The big difference, however, is Heidi (aka party Elliot). Elliot was originally going to say that "she likes everyone more", implying amplified attraction to both men and women. The more I thought about it, though, the more I concluded that didn't fit Heidi.

Heidi is not super attracted to people, nor is she even focused on such things. She's a wild party animal in a totally platonic way. When she kissed Carol, it was genuinely as Elliot describes (which doesn't make it okay to just randomly kiss people, but still).

The Heidi persona would only be distracted from her partying objectives by such things, and as a disguise form, that is unacceptable. TO PARTY IS HER PRIMARY OBJECTIVE.

As such, Heidi effectively being asexual (basically the opposite of what I almost made canon) makes a lot of sense to me, and I'm way happier with this as canon than "she's extra attracted to everyone".

"But wait!", a hypothetical person interjects. "The last panel is set up by Heidi not being attracted to anyone! How did this comic originally end?"

By Ellen saying "well, that's one way to make sure you act differently", and Elliot thinking about how all the secret identity forms are attracted to Cheerleadra.

Which would have been awkward, potentially amusing, and sort of makes sense from a "we're totally not the same person" cover story perspective. It's contrary to what I wanted to establish for Mild Mannered Elliot, however, and then became contrary to what I decided for Heidi.

Overall, it would have been an odd detail that doesn't really add much to anything, so that idea's been scrapped.