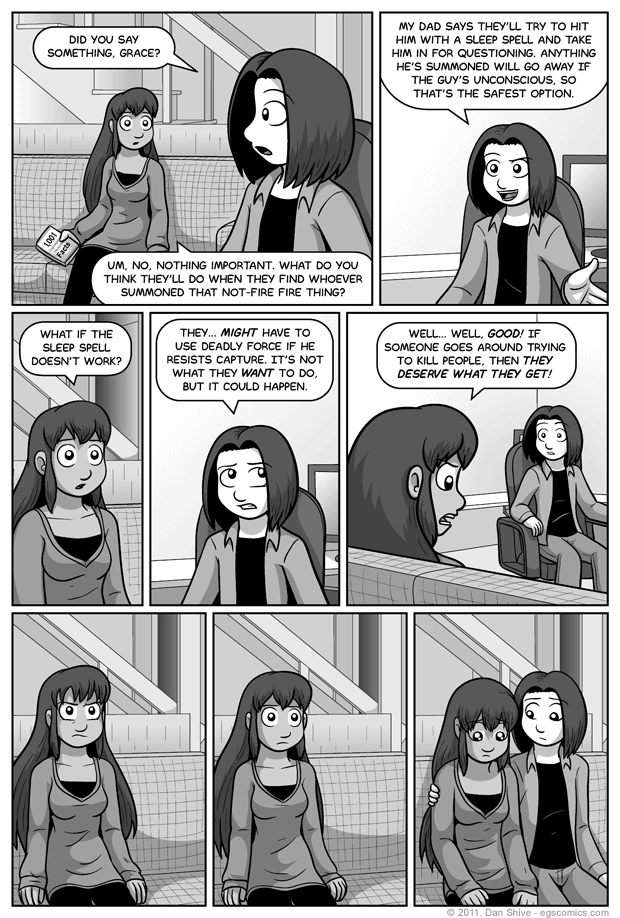 Posted February 9, 2011 at 1:00 am
Um... wow. I feel like I could've posted an image of someone kicking a puppy and it would have roughly the same emotional impact as this comic.

This comic is clearly following up on some earlier Grace moments, and this basic discussion was originally going to play out a bit differently earlier in the story (see this comic's commentary).

As much as I want to have some serious moments and emotions in this storyline, I've been attempting to maintain a certain range of tone. I think this comic, taken on its own, might step outside of that range. Perhaps it doesn't for most people, but I was speaking from the heart in the first paragraph of this commentary.

There's a LOT more I could say about what's going through the heads of Grace and Tedd, etc, but I'm trying really hard to not tell you guys the "right way" to interpret these comics and the story in these commentaries, so... um... hm. What to... OH!

Panels three and four were originally a single panel with Grace in the background and Tedd in the foreground. You could only see the back of Tedd's head, however, and I've been deciding more and more recently that that's a big no-no if I can avoid it. If someone is saying something, I want to show their face and the emotion that goes with it, the exception being if I can show that emotion in another way (such as body language). In this case, the upper-back of Tedd's head provided no such information.