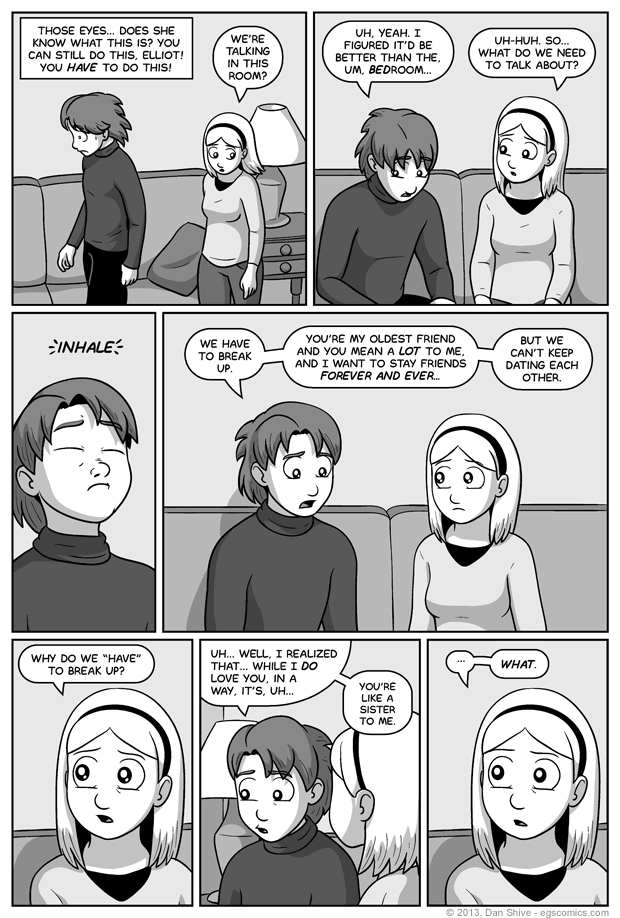 Well, this is... SORT of Friday-like, right? I mean, how she's going to react to this revelation is still a cliffhanger, after all, and oh who am I kidding. Thursday's comic was the most Friday-est comic of the entire storyline. I should have done some sort of filler on Thursday and claimed it was somehow key to the storyline to push things back a day. Maybe Grace doing a magic show? Can't get more relevant than that.

Panel three was difficult for me to draw, as it's difficult for me to accept that my characters have nostrils. I mean, logically, I know they do. The art style doesn't show them unless necessary, but they must be there. It's not like they're constantly breathing through their mouths or absorbing oxygen into their lungs through their skin. Nonetheless, part of me was greatly opposed to it.

This reminds me of a Krillin (AKA Kuririn) from Dragonball (minor SPOILERS ahead). He's a character without a nose, but what's interesting is that this isn't just a stylistic quirk. The fact that he has no nose it integral to him winning one of his fights against a stinky opponent early in the series. What's odd is that he later (or earlier? Can't recall) shoots boogers at an opponent to disrupt an attack, so how does... And breathing... And... Is it possible that something in Dragonball doesn't make sense?!