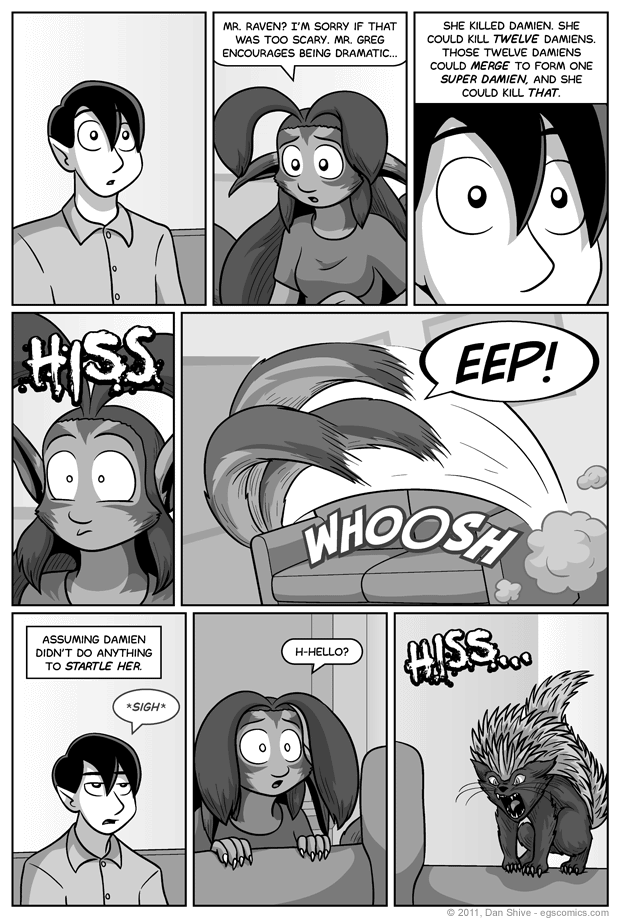 A fine example of Grace diving for cover. Now she just has to launch something into orbit... I hope that's not the next comic. Only Raven and that cat are nearby, and I don't think either of them would care for orbit.

I've heard many weird, crazy and strange theories regarding evolutionary reasons why animals do things, but one of the coolest reasons theorized for why cats hiss is that they're trying to convince you that they're like a venomous snake. Looking at them bare their fangs, the way they turn their ears back and hiss, and in some cases even stand up and move around as though they were some sort of cobra, there MIGHT be something to that.

I have no idea how an animal instinctively inherits a tendency to imitate another, but it wouldn't be the only example of it happening in nature. We live in a messed up world, dude. Messed. Up. And that's even without cats with hedgehog spines all up on their backs.

Incidentally, ladies, don't worry. I use "dude" loosely and in a gender neutral sense, so you're all dudes, too! Not that I'm calling you males or anything. I'm just saying no gender is implied by me when I say it. It's kind of similar to how women are called "sir" instead of "ma'am" in later incarnations of Star Trek.

So, basically, when I call a woman "dude", it's like they're a starship captain.