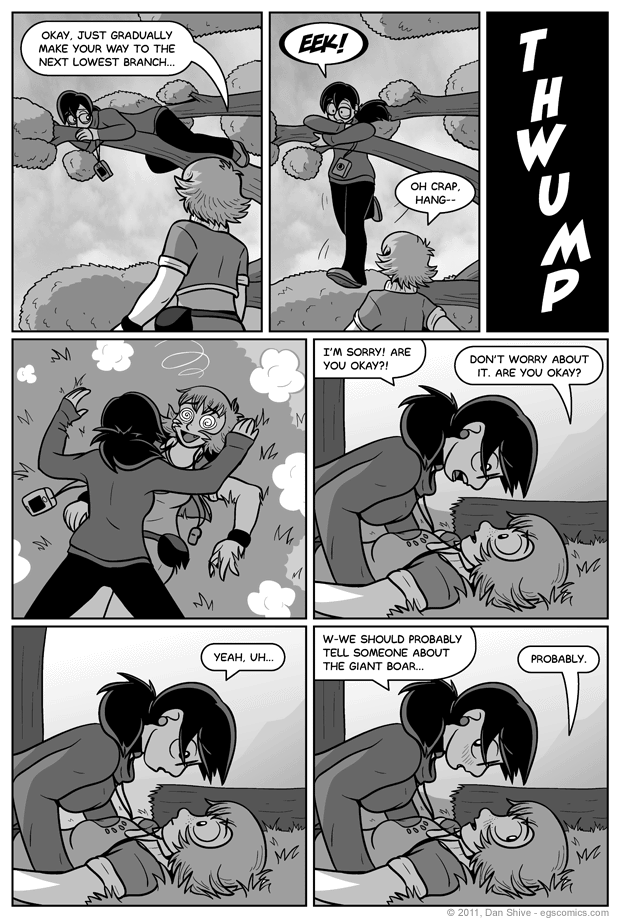 Posted November 4, 2011 at 1:00 am
It's been a while since we've seen that particular sort of face in panel four. For whatever reason, I associate that face with people getting tackled, glomped, or otherwise having people fall on them. I assume that's what people's faces look like under their helmets after getting tackled during football games.

You know, it's weird. Ever since Catalina showed up in this storyline, I've been getting a lot of comments about ships and shipping things, neither of which I know much about. I know next to nothing about boats, I rarely have to mail anything that won't fit in a letter-sized envelope, and I especially have not had occasion to mail anything that would have to be transported by a boat. I'm not even sure what would be transported by boat these days. Fish? I dunno.

One thing I DO know about boats, however, is that they're not on NCIS nearly enough. Seriously, they're the Naval Criminal Investigative Service, right? Naval means boats, or something related to boats. Or belly buttons. The show either needs more boats or bare midriffs. Frankly, I vote for both. That said, however, I have seen at least part of one episode where there was an honest-to-goodness boat involved, so they deserve props for that.