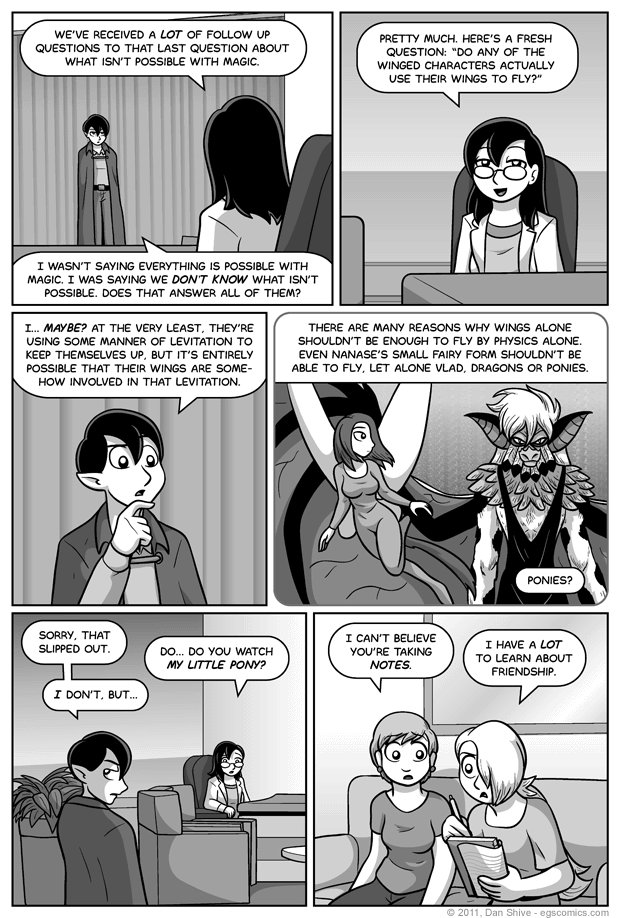 That first panel of this comic is based in reality. I got a fair amount of responses asking things along the lines of "does that mean _____ is possible?" The answer is as this comic says: Raven was only saying they can't know what isn't possible. That doesn't mean there aren't things magic can't do. It just means they don't know what those things are.

Okay, yes, I brought up My Little Pony: Friendship is Magic again, but gosh diddly darn it, it works here. At least, I think it works here. I guess it's entirely subjective. But seriously, you can watch almost any cartoon with winged protagonists who like to hover with slowly flapping wings, and you'll just KNOW there's a physics professor is crying somewhere.

The question "why can't people fly" might sound like a stupid one, but keep in mind how far humanity has come. I suspect most of us have seen footage of man's early attempts at flight, and it's fun to laugh at now, but we had to go through that sort of wackiness to figure this stuff out.

In the course of making this comic, I myself asked that question and searched for answers. One of those answers had joke potential, but the setup would have been tricky to the point that I decided it wasn't worth it. Basically, one of the reasons birds can fly is that instead of having a lot of muscles in their wings (thus making them heavier), the bulk of their muscles are in their chests. Nanase, bulky chest... I dunno. I could've done something with that, but it would have been so, so forced, especially since she her arms aren't even doing the flapping.

All that said, I like the idea Raven proposes here. Do the wings allow them to fly by traditional means? No. Are they using those wings to fly anyway? Yes! Everyone but physics professors win.