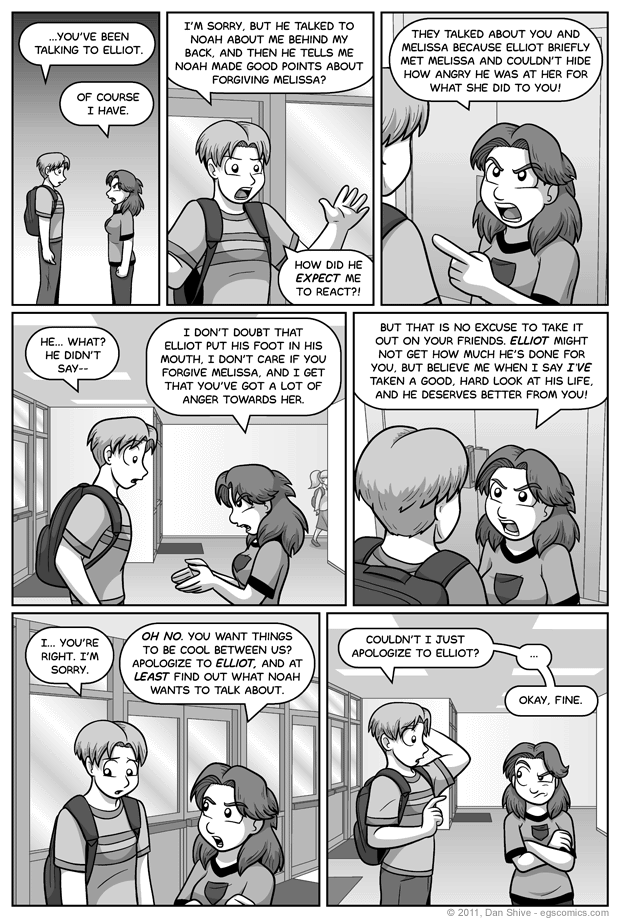 One implication I hoped to avoid in this comic was Justin "owing" Elliot. Elliot and Ellen wouldn't feel that Justin owed Elliot anything on account of Elliot helping him out, but that's not the same thing as believing that Elliot deserves to be treated better than he was.

Hm. Maybe that is "owing" him something. I don't know, it's late as I'm writing this, and it sounds like a point of nitpickery. In any case, the common courtesy of actually listening to what's being said and not interrupting doesn't seem like an unfair expectation to me. Granted, I expect that of people all the time and don't get it, so maybe it really is a big deal.

If not for that one background character in panel four, jerks would be able to accuse the school of being empty with the exception of Ellen and Justin. Because of her, however, it's clear that the school is full of hundreds upon hundreds of people who just happen to be conveniently off-panel.

Speaking of backgrounds, I really need to design separate, less complicated alternative entrances to these schools. The amount of lines involved can be nerve-wrecking. I should just have the entrance be a single door in a featureless wall or something, or maybe just have a featureless wall with a sign with an arrow and the words "entrance that-a-way". That would really up the quality of things 'round these parts.