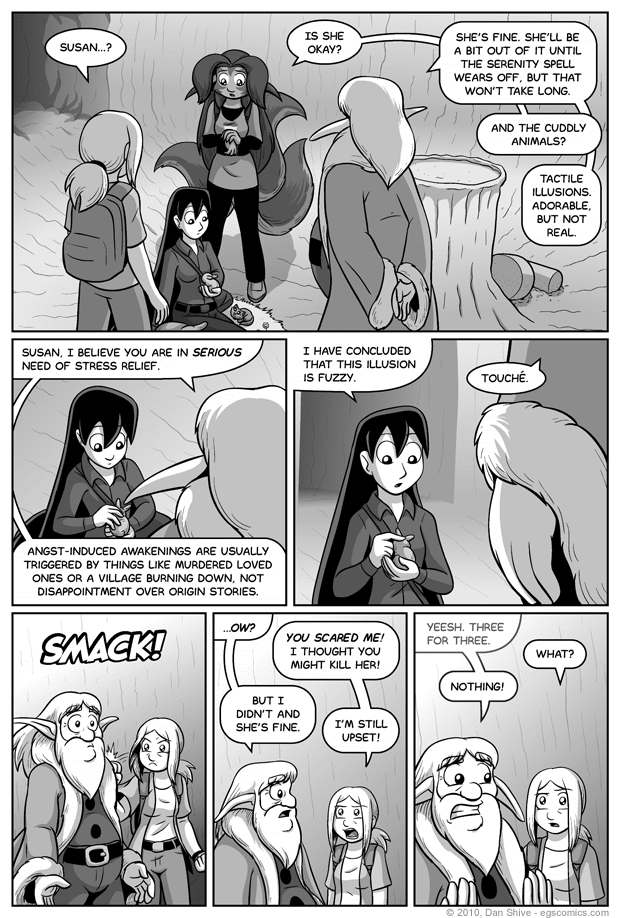 Okay, I know I shouldn't approve of Sarah hitting Jerry. It's needless violence, potentially antagonizing a being of far greater power than her own, etc, but I can't help but be proud of her. Don't mess with my friends, punk! *SMACK*

Obligatory note: Violence is bad and should only be used as a last resort unless you're kickboxing or something. Then it should probably be a first resort.

Susan's line in this comic is the sort of thing I regularly say when talking to animals. For example, I frequently inform cats that science has concluded they are fuzzy. I don't know why I say such things; it comes as naturally to me as stuff like "who's a good boy? Yes you are" comes to many dog owners. I think it's possible that I might be weird.

In addition to reminding me of how I communicate with animals, Susan's dialogue reminds me of River Tam from Firefly, which is fitting given that it's the result of a Serenity spell. It's a vague connection I didn't plan for, but now that I've seen it, I cannot unsee it and might be forced to watch my Firefly DVDs again. Well played, unintentional mental machinations...