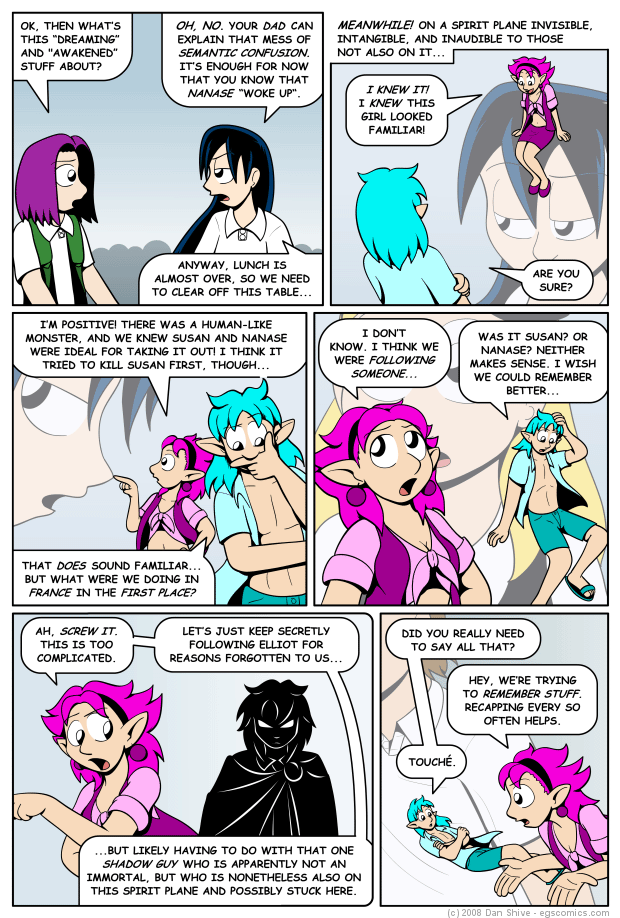 Posted August 25, 2008 at 1:00 am
I'm aware these answers result in more questions, but hey! This is more information than Susan was willing to give, isn't it?

These two haven't had any dialogue in the comic for a long time, and were due for an appearance if for no other reason than to remind people why Magus is following Ellen and not Elliot. Granted, many readers don't need this reminder and I'll likely hear some complaints about it, but there are readers who appreciate the occasional recap of important plot details. I particularly feel it is important if a plot point will actually matter within the context of the current storyline and/or arc. In addition, there IS new information on this page even if one had already guessed that these guys gave Susan and Nanase their magic, so cut me some slack, okies? Okies.

One of the things I had to keep reminding myself while drawing this comic was that the two immortals would have no physical impact on the other characters regardless of how they position themselves. The female may have been floating as though resting on Susan's head, but that would have no physical impact on Susan. In fact, had Susan nodding, there could have been a creepy image of the female immortal being partway inside of Susan's head... but I didn't want to draw that.