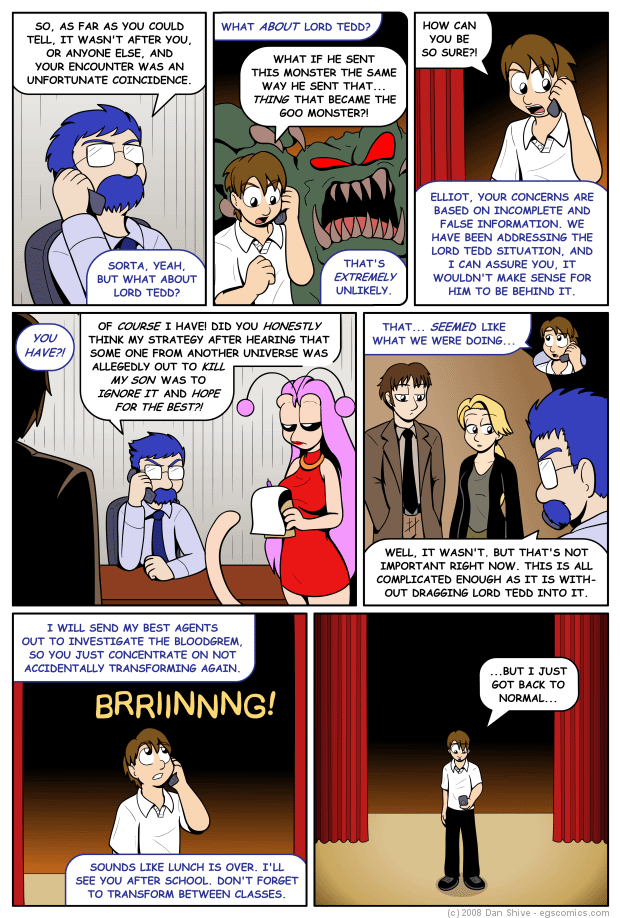 Posted September 1, 2008 at 1:00 am
Mr. Verres is correct that it's a coincidence. His misjudgement is of how BIG of a coincidence!

Anyway, this is an important look into the perspective of Mr. Verres and the main characters. As far as they're aware, the Bloogrem truly did have nothing to do with them, and only has some connection with them now by virtue of Elliot inadvertently provoking it.

Agents Wolf and Cranium return! *fanfare* ...Not much more to say yet. It appears Lavender is still not best buddies with them, however.

One thing that's possibly worth noting is that Elliot never saw the Omega Goo that Ellen thought, so whenever he pictures it, he visualizes one set of eyes, arms, and a mouth. Ellen would picture a much more monstrous monstrosity.

The "this is complicated enough as it is" joke continues, this time poking fun at the [[2003-10-13|Painted Black]] story arc. While I've integrated Nioi's presence into the ongoing story, her presence REALLY wasn't necessary during that arc. I'm making an ongoing effort to make this arc more focused. There's a lot going on, I admit, but it's all related in one way or another at least.