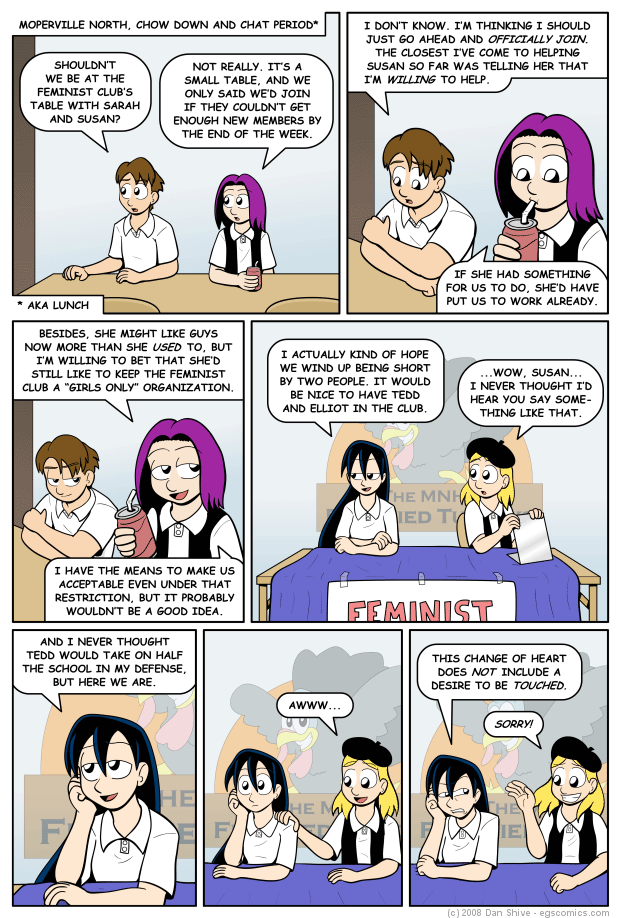 Posted July 7, 2008 at 1:00 am
I originally had Sarah wearing small circular sunglasses in this comic. They were there for no reason other than to be mildly amusing in combination with the beret, but without an explanation, I deemed them too distracting. With this comic, if I put something like that in, people are going to wonder why it's there and assume there's a reason behind it. Giving Sarah sunglasses while inside without explaining why she's wearing them would be like putting a 500 pound Gorilla in the comic without explanation and expect nobody to speculate about it.

As much as I like using color for the characters in EGS, I still fret over what colors to use for backgrounds. I originally had an off-white color for the background in an attempt at what I remembered my own high school walls being like, but it just didn't look good in the comic. I find myself torn between what would be appropriate for the location in real life and what would look good in the comic. Another sign that I need more practice.

Of course, another factor is these cursed school uniforms. Now that the comic's in color, the black and white uniforms make any and every other color choice stand out a lot more. At South, where they dress in every color of the rainbow, subdued backgrounds seem to work ok, as the characters add plenty of color to the panels. At North, however, having saturated backgrounds has become somewhat of a must.

Do me a favor: if the walls of some locations change colors later on, just assume artistic license, because I can pretty much guarantee there will be inexplicable changes to recurring locales as I get better with color. If not, I could always claim a wizard did it. In EGS, that possibility genuinely exists, so yay!