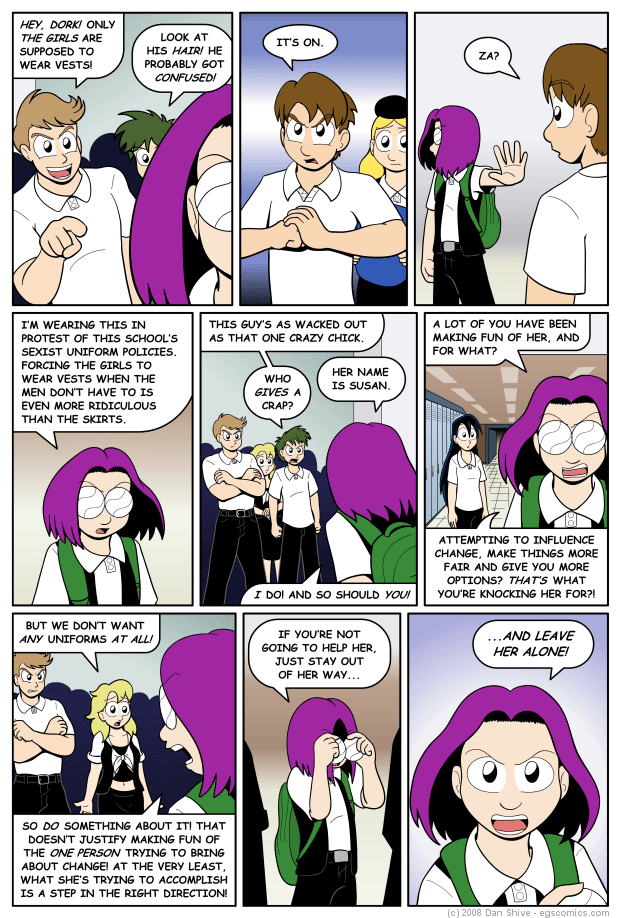 I had to resist the urge to give this page the title "TEDD SMASH! ...Verbally". That would be kinda funny, and would fit with the release of the new Hulk Movie, but I felt this comic shouldn't be slapped with a pop culture reference for a tile.

It will be confirmed within the comic itself soon, but that really big guy who called Tedd a dork is Tony. It's been a while since he's been in the comic and he lacks his #1 shirt, so I have no doubt that many won't realize it's him. That, and his design shifts slightly every time he's shown up in the past, so that doesn't help. I want him to be genuinely huge, and actually gave him some significant leg muscles this time. This may not be apparent in this final version, but trust me on this. If the sketch base for this comic is to be believed, he has some serious leg muscles.

I call that guy with the green hair "Dick", because it pretty much sums him up and it's an actual name some people have so I can get away with it. HA! He may or may not recur as a speaking and possibly even plot relevant character in the future. It's also worth noting that this is not [[2006-08-07|his first appearance]], though like Tony, his design has been upgraded.

And yes, as small a thing as it is, I predict there will be much cheering for the return of Elliot saying "za".